To share your memory on the wall of Arnold Cutkomp, sign in using one of the following options:

Receive notifications about information and event scheduling for Arnold

We encourage you to share your most beloved memories of Arnold here, so that the family and other loved ones can always see it. You can upload cherished photographs, or share your favorite stories, and can even comment on those shared by others.

Posted Oct 16, 2020 at 08:06pm
I just learned of Arnold's death and extend my sympathy. I was his secretary for several years in St. Louis and throughout many years kept in touch through our employment with The Hartford. When he and JoEllen retired to the farm in Iowa, I would stop and visit with them on my travels between St Louis, Mo and southern Minnesota. So many memories that I have treasured and will continue to treasure through my remaining years.
Carol Anderson
Comment Share
Share via:
SD

Posted Oct 15, 2020 at 11:15am
Bruce, Mark , Barry, and families,
Please accept our condolences on the passing of your dad, and grandfather. He sounded like quite a guy. A gentleman for sure. I'm sure you all have fond memories, especially of those trips to the derby through all the years. Those thoughts will keep you all in peace.

Posted Oct 14, 2020 at 03:43pm
Barry, Mark, and Bruce,
I am so sorry to hear about your Dad's passing.
You were very fortunate to have your Dad all these years.
I hope fond memories of happy times help you and the family through this loss.
Joy Cianci Falk

Posted Oct 11, 2020 at 12:07pm
I worked with Arnold at the Hartford Home Office Claim Department up until his retirement. I was a supervisor in another division of the claim department and was about the age of his oldest son. We became friends because I loved listening to his stories about flying his sports car of airplanes and stories involving his family. He lovingly talked about his three sons. I still clearly remember the interview at Arnold’s house when his son had applied to the Air Force Academy. I also clearly remember the stories of his son flying the F-111 and becoming a commercial airline pilot.
He was not only a colleague, mentor and friend, but a gentle soul that I admired and looked up to. A couple stories bring smiles and fond memories.

On a company bus trip to the Jacob Javits Center for a technology show, Arnold said he was going down to check the circle line before going into the exhibit hall and I said I take a walk with him down a couple blocks. The 2 Hour Circle line tour around the island of Manhattan was starting and he said he was going to take the tour before going back to the convention center. I joined them and for the next two hours we spent a beautiful fall day cruising the rivers surrounding Manhattan. At about 12:30 we where walking towards the convention center and he said, Ron I think I’m gonna go grab lunch and we detoured to a pub. With a grin he said, if a pretty girl sits next to you at the pub, don’t offer to buy her a drink. There was no pretty girls at the pub and after lunch we started heading back to the convention center. And then he said, Ron I think I’ll head over and see about buying a couple pearl ear rings for my wife. We then checked out a couple jewelry stores and then finally headed back to the convention center. We got back there about a half hour before we were scheduled to leave on a bus back to Hartford. It turned out to be the most enjoyable and interesting days I ever spent in New York City. Another adventure had to do with the inauguration of George Bush 41. I used to teach history and political science and was a member of the board of selectmen in Granby. A few days before the inauguration of Bush he asked if I had any interest in flying down to Washington DC and going to the inauguration. I thought it was a great idea and another guy I know, Ray, joined us. We flew down in his Mooney and landed at the College Park airport in Maryland. It was a wonderful few days. During the inauguration parade, we walked down Pennsylvania Avenue and into the bleachers in Lafayette Park across from the presidential viewing stand. Following the parade we warmed up by having a drink at the Mayflower Hotel. For the last portion of the parade, we felt like kings standing across from the presidential family in the expensive seats. Following the parade we warmed up by having a drink at the Mayflower Hotel. The hotel was hosting the inauguration ball for the medal of honor recipients. It was fascinating to watch such distinguish people entering the hotel.But the most excitement was still to come.
Back at the airport Arnold had a hard time starting the plane because it was so cold the morning that we were flying back to Robinson Airport in Plainville. After several attempts, it started and immediately we taxied-down the runway. I asked Arnold whether we should let the engine warm up and he said no it’s not a problem. I didn’t have much flying experience and I was a little nervous, but thetake off was flawless and off we were heading north. The engine started skipping somewhere over New Jersey, and I finally mentioned it to him as we were approaching Long Island. And he simply said very calmly, it’s just a magneto and we’re OK that if one was skipping because the plane had two. He immediately switched to the other magneto and it was dead. He said, well boys, I think we should put the plane down at MacArthur airport in Long Island. He immediately grabbed a book listing the layout of all airports, and started examining MacArthur airport. He called the tower and asked for a direct approach and when they asked whether he wanted to declare an emergency, he said no he just would appreciate a direct approach. As we were turning to bleed off speed and descend, the plane started shaking and I nervously ask him if that had anything to do with the engine. He again calmly replied, it was just normal turbulence. When we get on the ground and was drinking a cup of coffee, he said to us, if you guys weren’t with me I would’ve tried to land at Tweed New Haven and then he went on to explain the glide ratio of the Mooney.

With kindness and wisdom, he helped me navigate some challenging issues while working at the Hartford and raising two sons of my own. On particular tough days when I would stop at his desk and chat with him, he would share his mints and tell me a story that would both calm me down and help solve the problem. Arnold like to pull out an article about a train traveling to a particular destination which was a metaphor on living ones life. The point of the story was to live and enjoy life every day, and living just for the future.
Ron Desrosiers
Ellington, Ct
Comment Share
Share via:
BC

Ron, I do remember you as I too worked at The HIG. What a great memory and thanx for sharing. Sounded just like my pops. 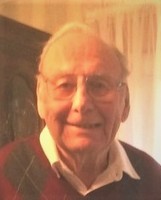