To share your memory on the wall of Thomas Ayres, sign in using one of the following options:

Provide comfort for the family of Thomas Ayres with a meaningful gesture of sympathy.

Receive notifications about information and event scheduling for Thomas

We encourage you to share your most beloved memories of Thomas here, so that the family and other loved ones can always see it. You can upload cherished photographs, or share your favorite stories, and can even comment on those shared by others.

Posted Apr 22, 2020 at 08:38pm
Tom Sharon and Jimmy, The last time I saw your Dad I had brought my Dad over for a short visit. It was good to see two Navy Veterans sitting together. I am sorry for your loss. I do know he led a good life and was always nice to me and my family. Please take comfort in knowing he was liked by so many and will be missed.
Comment Share
Share via: 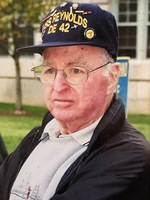