To share your memory on the wall of Margaret Carbone, sign in using one of the following options:

She came to America in 1953 by herself and worked at the Charlotte Hungerford Hospital in Torrington where she met her husband. In 1954 she married Bill and eventually the family moved to Rocky Hill in 1964, where she was an active member of the St James Roman Catholic Church. She worked at the Newington Children’s Hospital until her retirement.

Margaret lived an active and full life traveling to Ireland, England, Scotland, Wales and Australia to visit her siblings and numerous nieces and nephews. She was a member of the Irish American Club in Glastonbury where she could often be observed Irish step dancing (one of her passions). Her second passion was knitting, a self-taught skill that she excelled in. Hardly a day passed that she wasn’t knitting something beautiful for a family member or friend. She leaves behind her three daughters, Beatrice Swanson and her husband, John, of Florida; Valerie Carbone and her husband, Scott Malcolm of Tennessee; and Patricia Hegland and her husband, Thomas of Florida. She also leaves behind 6 grandchildren, Cristina Covalt and her husband, Christopher, Brooke and Nichole Connor, Ashley and TJ Hegland, and Chelsea Malcolm; and 2 great-grandsons, Charles John and Sean William Covalt. She is also survived by her sister, Mary Dawson, of England and numerous nieces and nephews. The family would like to thank Pastor Michael Guibord of Grace Communion International for visiting and praying with Margaret and her daughter, Valerie, and helping her with her transition.

Mindful of the current health restrictions, services will be private for immediate family only. In lieu of flowers, memorial donations may be made to the American Cancer Society 111 Founders Plaza, East Hartford, CT 06108. The Farley-Sullivan Funeral Home is serving her family. To share condolences with her family, please visit Farleysullivan.com.
Read Less

Receive notifications about information and event scheduling for Margaret

We encourage you to share your most beloved memories of Margaret here, so that the family and other loved ones can always see it. You can upload cherished photographs, or share your favorite stories, and can even comment on those shared by others.

Posted Apr 02, 2020 at 04:09pm
Dear Family and Friends of Margaret,
Such a beautiful being! My Mom is a resident at The Lodge at Cold Springs and Margaret was always so kind to her. May her loving ways be an inspiration and comfort to all who were so blessed to know and love her. We are truly sorry for your loss.
Love,
Joan Anders' Family
Comment Share
Share via:

Posted Apr 01, 2020 at 08:31pm
So sorry to hear of 5e passing of Margaret “ Peg” Carbone. She and Bill were our neighbors on Pondside Lane and we always enjoyed their warm and welcoming spirit! They were always so kind to our all the children on the street offering a free lollipop every Saturday. My kids never forgot that!
Peg was such a caring soul who was always helping others. I always enjoyed talking with her her and her stories about growing up in Ireland.
You will be missed and “ May the road rise to meet you ...... may God hold you in the palm of His hand”.
Laura, Justin, Brendan and Bridget Kearney

Posted Apr 01, 2020 at 02:39pm
I met Margaret at The Lodge where she often visited. My mom was a resident there. Margaret was an active member of their knitting club and assisted me with the Bingo there on Friday nights. Margaret was very good to my mom and I. She was a very thoughtful person. Even after my mom passed I kept in touch with Margaret once in awhile. I was so sad to hear she was ill, she was always on the move. Always going somewhere fast. I will remember Margaret with great fondness. She was always ready to help someone in need. May she rest in peace. She is with Bill once again.
Comment Share
Share via:

Posted Apr 01, 2020 at 08:53am
We will miss Margaret in knitting club. She was a very talented knitter and was willing to share her vast knowledge. May she RIP
Rosemary Dill
Comment Share
Share via: 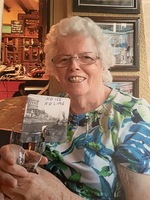