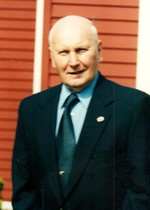 Leo H Milewski, 95, a long-time resident of Glastonbury, passed away peacefully at his home, with his niece Lori by his side on Saturday, May 23, 2020. He was born on July 16, 1924 and raised in Hartford, CT. At the age of 18, Leo joined the Marine Corps, served in the Pacific, carrying out combat missions on the Islands of Tarawa, Guam, and the Philippines. Returning home from the war Leo met fell in love with, and married Sophie Buikus of Glastonbury, CT, on August 31, 1946 and remained happily married until Sophie passed away on February 17, 2015. Leo and Sue would have celebrated their 69th anniversary. Leo, loved to play golf with his buddies at First Federal Savings, football with the East Hartford Crusaders and baseball with Post 51. He also cheered on the New York Yankees. Leo was very active in the Community and heavily involved in Veterans affairs. He is a long-time member of American Legion Post 64, Originator and Commandant of the Peter P Monaco Jr Detachment of the Marine Corps League, the Polish Legion of American Veterans Post 51, VFW Post 2083, and Disabled Veterans Chapter 12. He’s also a member of, The Glastonbury Rotary Club, the Glastonbury Knights of Columbus, and the Glastonbury Elks Lodge 2202. Leo was an entrepreneur and along with two of his four brothers started a Machine shop known as Micro Components located in the Flannigan building on Mill Street which eventually evolved into M&M Welding which continues to this day under new Ownership. It is still located on Mill Street. However, Leo was best known as “Leo the Plumber” and operated his business under the name of Milewski Plumbing and Heating. He will be deeply missed by his nieces Lori Rybolt of Virginia, and Nancy Sheridan of Glastonbury, his nephews Dick Ozimek and his wife Jane of Florida, Bob Schriendorfer of Glastonbury, and Tom Chernesky of Noank. He will also be missed by his dear friends Joyce and Ed Willing of Glastonbury, Harry and Terry Fisher of Florida, and Maureen Burke of Florida, and Robert Lopa of Glastonbury. Leo was predeceased by his parents Anthony and Helen, his five sisters, Alice, Mary, Helen, Jennie, Dorothy and four brothers, Chester, Charlie, Venner, and John. A special thanks to his caregivers, Chancye, (Lil Leo) and Awtumn (AK) In lieu of flowers please consider contributions to St. Paul Church of the Community of SS. Isidore and Maria, 2577 Main Street, Glastonbury, or The Peter P. Monaco, Jr. Marine Detachment of Glastonbury, 2205 Main Street, Glastonbury, CT 06033or the Arthritis Foundation, INC. Connecticut Chapter, 35 Cold Spring Road, Suite 411, Rocky Hill CT 06067.
Friends may pay their respects to the Milewski family, Saturday June 13, 2020 from 9:00 to 9:45 am at the Farley-Sullivan Funeral Home, 50 Naubuc Ave., Glastonbury, followed by a Mass of Christian Burial at 10:00 am in St. Paul Church of the Community of SS. Isidore and Maria, 2577 Main St. Glastonbury. Burial with full military honors will be at Saint Augustine Cemetery, 136 Hopewell Road, South Glastonbury, CT. To extend online condolences, please visit www.farleysullivan.com