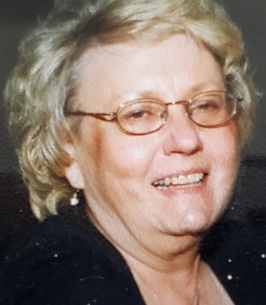 Joan Diane (Strumskas) McBride, 77, wife of the late Terrence M. McBride, of Berlin, passed away February 20, 2022 at Autumn Lake Healthcare of New Britain. She was born in Hartford, daughter of the late Walter and Nellie (Opalacz) Strumskas. Joan was a graduate of Wethersfield High School, and later earned her Bachelor’s Degree from Morris Harvey College (The University of Charleston). Joan completed additional training at St. Francis Hospital and worked for years as a medical lab specialist at Harford Hospital. She also spent many hours volunteering as a parent in the Newington school system when her sons were young. She was an avid reader and also enjoyed doing Crossword puzzles in her spare time. Joan loved to shop and would frequent many stores looking for a bargain. Most of all, Joan loved her family and grandchildren. Joan’s witty and sarcastic humor always bought a smile to her granddaughters faces. Her grandchildren live in Connecticut and California, and her visits with Terry were always enjoyed by everyone.
Joan leaves behind two sons: Jeff McBride and his wife Aimee and their children Lauren, Madisen, and Hayden of Berlin, and Chris McBride and his wife Kerianne and their children Sawyer, Griffin, and Calla of Corte Madera, California. Joan will also be greatly missed by her brother Michael Strumskas of Portland, brothers and sisters in law Joan Demarco of Newington, Paul McBride and his wife Denise of Newington, Gemma Mahoney and her husband Vincent of West Hartford, Thomas McBride and his wife Val of Newington, Kathy Gervais and her husband Robert of Newington, Martin McBride of Wethersfield, Richard Casciano of Newington and William Gollnick of Berlin, as well as numerous nieces and nephews. She was predeceased by her sister Carole Gollnick and sister in law Nancy Casciano.
A Mass of Christian Burial celebrating her life will be held on Thursday February 24, 2022 at 10:00am, in the Church of the Incarnation, 544 Prospect Street, Wethersfield. Masks are requested in church. Burial will follow in Rose Hill Memorial Park, 580 Elm Street, Rocky Hill. There are no calling hours. The Farley-Sullivan Funeral Home has care of the arrangements. To extend condolences, please visit Farleysullivan.com.