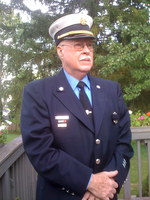 James Edward Payette, 81, of Wethersfield, CT, passed away peacefully on October 2, 2020, holding hands with his wife and surrounded by his children. He was born on March 19, 1939, in Detroit, Michigan. He is survived by his wife of 59 years, Lynn Van Ausdall Payette, and his children, Robin Payette Neary and husband James, Dr. Kim Payette-Hwang and husband Dr. John Hwang, and Steven Payette and wife Jeneit; his grandchildren Rebecca, Alexander, Alyssa, Julia, Kassandra, and Sophia; his great-grandchildren Mackenzie and Bellahmi; various nieces and nephews, and a sister. His is predeceased by his parents and a brother.
James was raised in Dearborn, Michigan, where he graduated from Fordson High School and began a lifetime of service to his country and his community. He enlisted in the U.S. Navy where he was named Honor Man at Boot Camp, and he was in the Submarine Service for ten years, serving on the USS Thornback, Blenny, Conger, and Theodore Roosevelt. He also served in the Naval Reserve and Army Reserve, from which he received the Army Achievement Medal. He was proud to be a member of the Holland Club, signifying 50 years of submarine service. He was a 45-year member of the American Legion Post 23, where he was Past Commander and was still serving as Chaplain at the time of his passing. James was proud to be a Hartford firefighter, retiring as a Lieutenant after more than 20 years of service. He then became a firefighter for the State of Connecticut, stationed at the University of Connecticut- Storrs and the Connecticut Valley Hospital. Always dedicated to helping his community, he also served in the Wethersfield Volunteer Fire Department and as a Lieutenant in the Wesconnet Volunteer Fire Department in Jacksonville, Florida, while serving in the Navy there. James was a Master Mason of the Masonic Hospitality Lodge No. 128 and a 32nd degree member of the Scottish Rite, and he performed in the Shriner’s Sphinx Temple Band. James was a gifted musician who played the euphonium and baritone horns most of his life. He was a member of many different military and civic bands, including the 102nd Army Band from which he retired as Sgt. 1st Class, the 1st Company Governor’s Foot Guard Band, the Army National Guard Band, and many other bands throughout his life, including participating in Tuba Christmas. James continued his service to community by serving as a CT Auxiliary State Trooper, a Docent at the Connecticut State Police Museum and a Docent on the USS Nautilus at the Submarine Force Museum in Groton. He also taught many First Aid classes for the American Red Cross. James worked as a Security Guard at Silas Deane Middle School in Wethersfield where he was extremely popular with the students. Continuing his lifetime of hard work, he also worked for the Essex Steam Train, worked on board the riverboat Lady Fenwick, and worked as a Security Guard at the Mystic Seaport Museum. James was a motorcycle enthusiast and was a member of the Retreads Motorcycle Club. He also enjoyed the peacefulness of kayaking around our beautiful state. James adored his family and we adored him back. He was an inspiring, steady presence in our lives, and he continues to inspire us every day. He will be forever missed and in our hearts.
Visitation will be held on Saturday, October 10, 2020, from 11:00 am to 1:00 pm at Farley-Sullivan Funeral Home, 34 Beaver Road, Wethersfield, CT. Service with full Military Honors will follow at Farley-Sullivan Funeral Home at 1:00 pm. Interment will be at the State Veteran’s Cemetery, Middletown, CT, at a later date. If desired, memorial donations may be made to the Hartford Firemen’s Benevolent Society, P.O. Box 341282, Hartford, CT 06134-1282, or to American Stroke Association. To leave a condolence, or for further information please visit FarleySullivan.com