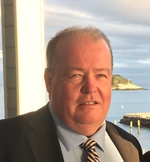 James “Jim” Brendan Droney, 59, of Suffield, husband to Diane (Gutkowski) Droney, of Suffield, passed away peacefully on Sunday, September 6, 2020, with his family by his side. Jim was born on May 3, 1961 to the late James and Noreen (Martin) Droney in Hartford. He was a graduate of Newington High School, University of Connecticut (School of Engineering) and went on to get a Master of Science Degree from Rensselaer Polytechnic Institute. Jim was proud to work at Pratt and Whitney most recently as the Associate Director of Quality Assurance. He was an avid sports fan, cheering for his beloved Red Sox, Bruins and Patriots, but most important to him was watching his children’s sports. Jim had a devotion to his Irish heritage. At the time of his passing, Jim was the acting President of the Irish American Home Society in Glastonbury, he was also on the Board of Directors. Along with his children, Jim was an active member of the Gaelic Athletic Association.
Besides his wife Diane, Jim leaves behind his children, Emily Abramowitz (Mike) of East Granby, Madeline Droney of Milford, James M. Droney of Tolland, Jack Droney and Maeve Droney both of Suffield. His grandchildren, Elizabeth, Michael and Nolan, his siblings Brendan Droney (Lynn), of Wethersfield, MaryAnn Droney and Scott Ladden of Coventry and Kathleen O’Neil (Michael) of Marlborough. Along with his uncles, Chris Droney from Ireland, John Droney and Frank Droney from West Hartford as well as numerous nieces, nephews and in-laws.
Friends and relatives may call, TODAY, Thursday, September 10, 2020 from 4:00 to 7:00 PM at the Farley-Sullivan Funeral Home, 34 Beaver Road, Wethersfield. A private Mass of Christian Burial celebrating Jim’s life will be held on Friday, September 11, 2020 at Sacred Heart Church in Suffield, CT. Burial will follow in Woodlawn Cemetery in Suffield, CT. In lieu of flowers, the family asks that donations be made to the charity of your choice in Jim’s memory. To extend online condolences, please visit FarleySullivan.com