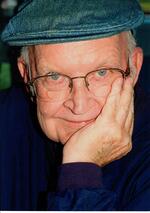 INSTRUCTIONS TO WATCH LIVE STREAM BELOW

Henry Richard Podolak, 87, of Newington passed away peacefully on Friday, December 11 at home with his loving wife, Elizabeth (Turner) Podolak by his side. Henry “Hank” was born on August 1, 1933 in New Britain, CT to the late John and Julia (Michalowski) Podolak. He graduated from New Britain High School and later Boston University with a Bachelor of Music Degree. While at Boston University, he played in the BU Band, was a member of Sigma Phi Epsilon Fraternity, and was elected as a brother into Delta Omicron, an international professional music honors fraternity to support excellence in music and musicianship. Hank was proud and honored to have had an opportunity to play with Louis Armstrong while in Boston. Following graduation, Hank enlisted in the Army and spent time in Germany performing for the troops.
During his professional career with Wethersfield Public Schools, he was most respected for his dedication and commitment as a music educator for the elementary, middle and high school students. As the high school band director for 25 years, he created an award-winning band and drill team competing in many local and national parades and festivals including an invite to perform at Disney’s newly opened Epcot Center in Florida. He was most known for his 7:00 am rehearsals, impeccable marching band formations, football half-time shows, school concerts, and his passion to bring out the best in his students. Over the years, Hank received many letters from his former students thanking him for the great memories and lasting impressions he had on their lives. His love of music extended beyond the classroom as he spent many weekends over the years playing percussion with local bands. He enjoyed his weekend “gigs” and played with the Stan Scott Band up until the summer of 2014. Hank took pride in everything he did whether he was giving students private drum lessons at home or making sure his lawn was always in pristine condition. He loved dogs and enjoyed the years he spent spoiling his beloved Pippin and Zeke.
Hank married his wife Elizabeth (Betty-Jane) almost 58 years ago on December 29, 1962 and they lived in Wethersfield until 2017. Most important to him was his family. In addition to his wife, who was an amazing caregiver during the past years as he struggled with dementia, he is survived by his only daughter Laura and her husband David Falt, who he loved as his own, and two adored grandsons Matthew and Timothy. He looked forward to every opportunity to enjoy a home cooked meal at his daughter’s, attend his grandsons’ school & extra-curricular events, and celebrate birthdays and other special occasions with family and friends. His grandchildren are thankful for the many cherished memories of fun day trips spent with grandpa. Hank is also survived by his sister-in-law Mary Podolak of Virginia and her children Susan, Katie and John. He was predeceased by his only brother John.
The family would like to thank the staff at Cedar Mountain Commons, his caregiver from Visiting Angels, and Hartford HealthCare Hospice for their compassion during this difficult time.
Friends may call on Saturday December 19, 2020 from 8:30 to 9:30 am at the Farley-Sullivan Funeral Home, 34 Beaver Road, Wethersfield. Masks are required and social distancing will be observed. A private Mass of Christian Burial will be celebrated at 10:00 in St. Elizabeth Seton Church of St. Josephine Bahkita Parish, Rocky Hill. The Mass may be viewed via webcast. A private burial in Village Cemetery will follow. To view the webcast, or to extend condolences, please visit Farleysullivan.com.
In lieu of flowers, donations in Hank’s honor can be made to the Alzheimer’s Association CT Chapter, 200 Executive Boulevard, Suite 4B Southington, CT 06489 or to the Wethersfield High School Band Boosters, 411 Wolcott Hill Rd. Wethersfield, CT 06109.