Obituary for Francis A. Preli 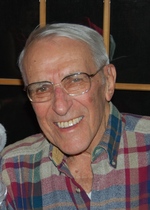 Francis August Preli, 87, of Glastonbury, devoted son, loving husband of Honey for 64 years and wonderful father peacefully passed away March 9 exactly where he wanted to: at home under the care of his family. Fran, a life-long resident of Glastonbury, came from wonderful families as the son of Bartholomew and Rose (Christian) Preli. Growing up in South Glastonbury, his outdoor adventures centered around the woods of Great Pond and Matson Hill. Fran enjoyed sports, playing soccer, baseball and basketball for Glastonbury High School Class of 1949. He played four years of soccer for the University of Connecticut and was named Captain of the 1952 team. He played soccer while serving in Germany as a First Lieutenant in the U.S. Army during the Korean War. Just prior to leaving for his service in Germany he married Evelyn Louise Plukas of Bridgeport. Fran worked at Megson and Hyppa Civil Engineers as a surveyor and draftsman while raising four children with Honey: Kenneth Bart, his wife Rona; Lynne Grace; Elizabeth Marie and her partner Michael Dibble; Jane Louise and her partner Gary Campbell. Fran loved gardening, picking apples, fishing and building stonewalls. Fran was a charter member of the Glastonbury Hartwell Soccer Club, serving as treasurer and coaching for 17 years. He was a trustee for St. Paul Church, serving on the finance committee. He was a member of the St. Paul Men’s Club serving as Secretary and helped run Bingo for many years. He also leaves behind two grandchildren Stephanie Lynne Preli and Robert Bart Preli, sister-in-law Anna Plukas, brother-in-law Fritz DelMastro along with numerous nieces and nephews. He was predeceased by his wife Evelyn “Honey” Preli, his sisters Roseanne DelMastro and Elizabeth Tarbox. Donations in his memory may be made to Special Olympics Connecticut.
Friends may call on Friday March 22, 2019 from 5:00 to 8:00 pm at the Farley-Sullivan Funeral Home, 50 Naubuc Avenue, Glastonbury. A Mass of Christian Burial celebrating Fran’s life will be held on Saturday March 23, 2019 at 10:00 am in St. Paul Church of SS Isadore and Maria Parish, 2577 Main Street Glastonbury. A springtime burial will take place in St. Augustine Cemetery, South Glastonbury at the convenience of the family. To extend online condolences, please visit Farleysullivan.com.