To share your memory on the wall of Elizabeth Gallagher, sign in using one of the following options:


Elizabeth McKee Gallagher, 78, of Wethersfield, peacefully passed away Sunday, July 26th, 2020 after each family member was able to express their love and gratitude for her life’s work as Mother, Grandmother, Aunt and Sister-in-law. Born on February 25th, 1942 in Hartford, Connecticut, she was the daughter of the late John and Gertrude Reardon Gallagher. She is predeceased by her brother, John (Jack) Gallagher, and her beloved son, Christopher John Walters, whom she has missed so very, very much.
Elizabeth, fondly known to family and friends as Lee, grew up in Great Barrington, Massachusetts on Hollenbeck Avenue where her childhood days were spent fishing in the morning and swimming all afternoon. She was once selected to be the subject of a Norman Rockwell painting, only to be turned away later as the painter was looking for the young girl he had seen with the fiery red hair and matching spirit, and not the girl in bows and a pink dress that her mother switched her into.
Lee returned to Hartford after her father died on April 11th, 1946 so that her mother could work at Northwest-Jones Junior High School. Lee went on to graduate from high school at “The Mount” or Mount Saint Joseph’s Academy in 1960, obtained her B.A. from Our Lady of the Elms College in 1966, and earned her Master’s degree from Trinity College in 1972. She was a PhD Candidate at the University of Connecticut whose independent dissertation focused on the leadership and funding of the Hartford Public School system; proving how far ahead of her time she really was.
Employed as an elementary school teacher by the Hartford Public School system for 52 years, leaving only to begin her battle with breast cancer at the age of 75, Lee was known as “Mrs. Galli-gators.” Using skittles, light-up dinosaurs, and positive reinforcement to connect with her students, Lee was a master at getting children to read. She preferred the kids with behavioral challenges because she saw the light in every student. Lee also worked at night teaching English as a Second Language to help put her 4 children through college, following in her own Mother’s footsteps.
She was a loving and strong Irish Mother, loyal friend, and fun grandmother to her 7 grandchildren who flourished in her support. She treasured her relationship with Karen Gallagher, her sister-in-law, and her beloved nieces, Terry Gregoire and Patty Crispi to whom she was “Lee Lee” before even becoming a mother herself. Being a “lefty” herself, she believed left-handed people to be of higher intelligence, and as an avid knitter she knitted berry hats for babies, sweaters, scarves, and over 75 Christmas stockings for her family and friends. She loved watching Survivor with her granddaughter Emily, and was an avid fan of both Big Brother, Masterpiece Theater, and Downton Abbey. She read the “Irish Sports Page” every day (obituaries) and could answer most questions on Jeopardy. She believed in being honest, working hard, and the power of surrounding yourself and loved ones with kind people. She loved the Patriots, Red Sox, Celtics, and UConn Basketball, and, as a life-long Democrat, was anxiously awaiting the upcoming election on November 3rd, 2020.
Lee is survived by her children, Elizabeth Enright and her husband, Michael Enright, of Wethersfield, Matthew Walters of Chapel Hill, North Carolina, and Patrick Walters and his Partner, Angel Crespo, of Ansonia, Connecticut, and her grandchildren Thea Walters, Michael Messina, Aidan Walters, Emily Messina, Tess Walters, Cathryn Walters and Christopher Patrick Walters, and their Mother, Heather Finegan.
In lieu of flowers, donations may be made to the Special Olympics CT, 2666 State St., Hamden, CT 06517.
Lee’s funeral arrangements have been entrusted to the Farley-Sullivan Funeral Home, Wethersfield. For funeral service information please visit farleysullivan.com.
Read Less

Receive notifications about information and event scheduling for Elizabeth

We encourage you to share your most beloved memories of Elizabeth here, so that the family and other loved ones can always see it. You can upload cherished photographs, or share your favorite stories, and can even comment on those shared by others.

Their is an old saying "Every Irish day ends with a rainbow" Lee was Wells Quarter Villages' living rainbow. She was a great and kind neighbor and will be missed by all of us.
God be with her,
Ginny and John DiBella
Comment Share
Share via:
JO

Posted Aug 02, 2020 at 05:38pm
We send our love and sympathy to all the family. Over the years we have shared many memories. Not that long ago we shared new genealogy information at Bob and Sue’s farm and remembered times our families shared. God bless you all with smiles as you recall your mother’s life.
Love and God bless,
Jim and Joan O’Loughlin
Comment Share
Share via:
PW

Posted Jul 29, 2020 at 08:45am
Mom, I will miss you every day. You always gave us everything you had leaving nothing for yourself, and every free second you had to spare you spent on supporting and encouraging all of us. I have an amazing life today because of the sacrifices you made for me and, more importantly, for the unending love and support you tirelessly and continually showered me with. When I was considering going to law school in my 30s, you were the only person who did not hesitate or question if it was the right decision. Without skipping a beat you said "Yes, go for it" and that's all I needed to make up my mind. I will miss your sense of humor. I have yet to meet anyone else who can match it. I will always love you. 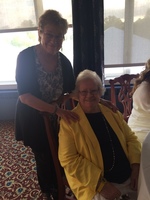