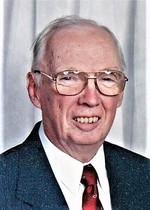 Edward J. Temple, of Hartford and Wethersfield, beloved husband, father, and grandfather passed away on May 9, 2020 at St. Francis Hospital at the age of 92. He was born in Waterbury, CT. on April 2, 1928, the son of Edward J. Temple Sr and Eileen Leary Temple.
When his mother died shortly after his birth, he was taken in by his great aunt Nora Leary Roche and her family who provided a stable and loving environment. During his childhood, he spent several years living at a CCC camp and attending a one-room schoolhouse in Voluntown, CT before moving to Hartford and graduating from Hartford Public High School in 1945. A serious and hard-working student, he was awarded the prestigious Pratt Scholarship to Yale University where he earned a degree in Chemical Engineering in 1949. His time at Yale remained a cherished memory for the rest of his life. While at Yale, he also met the love of his life, Arlene Leary of West Hartford. They were married in 1951 and started a family soon after.
After college, Ed started working for Plax Corporation as a plastics engineer. When the Korean Conflict began, he joined the U.S Army Chemical Corp, supporting the war effort as a 1st lieutenant until 1955 when he returned to Plax and his growing family. The family moved to Wethersfield in 1956.
During his successful career at Plax (later Monsanto), Ed earned 8 patents for packaging solutions and travelled to Japan and other countries as an expert in his field. When the company was moved out of state, he took an early retirement and started his second career as a real estate agent at Alderman Realty and Coldwell Banker in Wethersfield. He finally retired when he was 81 years old.
While raising their 4 children in Wethersfield, Ed and Arlene were very active in church, school, and community activities. A quiet and modest gentleman, he believed in getting involved and helping others. He was a member of the Capitol Region Planning Association, Wethersfield Planning & Zoning Commission, the Wethersfield Historical Society, and the Corpus Christi School Building Committee. He was involved in the early planning and financing for The Church of the Incarnation and was a reader at mass for many years. In recognition of his service to the church, he was awarded the St. Joseph Medal presented by the Archbishop of Hartford. In addition, he volunteered for 10 years as a reader for CRIS Radio for the Blind. For many years he was a moderator for state and local elections. He took an active role as a volunteer for Boy Scouts and Hartford County 4-H. Although he had never sung before, he enjoyed singing with the Silk City Barbershop Chorus for several years. He and Arlene were lifetime members of the Irish American Home Society and very proud of their Irish heritage. He was also a great swing dancer! He always loved reading and remained fascinated with how things worked until he died.
After their children grew up, Ed and Arlene were able to travel in the US and abroad. They were lucky to visit Ireland, England, France, Italy, Belgium, Netherlands, Mexico, and many more destinations. They also spent enjoyable vacations in Lenox, MA and Hilton Head, SC.
In 2015, Ed and Arlene moved to Avery Heights in Hartford. The family would like to thank the companions, aides, nurses, maintenance personnel, and administrative staff for their help and kindness over the past years.
Ed is survived by his wife, Arlene Leary Temple, his son Daniel of Long Beach NY, his daughters Kathleen Temple of CT, Patricia Temple of VA, and Noreen Temple Walsh of Windham CT. He is also survived by his 2 grandsons Timothy Walsh of Norwich, Casey Walsh of Windham and his granddaughter Cailyn Walsh of Hartford. He LOVED being their grandfather. He was predeceased by his sister, Eileen Temple Rupf and his favorite cousin, John Roche.
Due to the Covid-19 Pandemic, a memorial service will be held at a later date. In lieu of flowers, contributions can be made to Hartford County 4-H Camp in Marlborough CT at https://tinyurl.com/DonateHC4H or Corpus Christi School in Wethersfield.