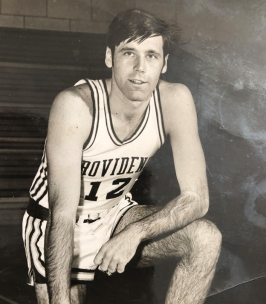 Charles Jay Conway, 74, of Old Lyme, CT, beloved husband of Anne (Pettit) Conway died peacefully Friday, June 17 after a short courageous battle with lung cancer. Jay was born in Hartford on April 3, 1948, son of the late Charles and Jean (O’Neil) Conway. A natural athlete, he grew up playing basketball on Madison Street in Hartford, continued to play for South Catholic High School and then Providence College until he graduated in 1970. Jay remained an avid Big East fan throughout his life. Prior to his retirement he was employed as an appraiser for The Connecticut Department of Transportation for over 20 years. Jay spent every summer of his youth and young adulthood at Old Lyme Shores, where he made many cherished and lifelong friends including Greg (and Mary) McMahon, and a young girl, Annie, who would become his wife and the love of his life. Jay reunited with Anne in the early seventies (a decade after escorting her to her Junior Prom). Together they created a home, first in West Hartford, and then returned to Old Lyme Shores, where neighbors, friends and family know that their motto is always “The More the Merrier.” You’d be hard pressed to find a neighbor or friend that hasn’t shared a laugh and a drink with Jay at the picnic table or in the garage. And those of us that loved him most dearly are also left with countless happy memories of spirited set back games played late into the night; somehow Jay always had the Jack of trump.
In addition to his wife Anne, Jay is survived by his daughter Hope Cameron and her husband Jamie of West Hartford, and his grandchildren, of whom he was so proud, Charlie and Kate. His sister-in-law Mary Pettit Orluk of Farmington, his brother-in-law, James A. Pettit and wife Christine of West Hartford, and his nieces Marianne Pettit Watt (husband Richard) and Catherine Pettit Easter (husband Adam) and niece Julia Orluk. He was preceded in death by his parents, his beloved maternal grandparents Patrick J. (Bucky) and Helen (Foley) O’Neil, his brother-in-law Lawrence A. Orluk and his aunt Jane E. Conway.
As was his wish, there will be no public services for Jay and memorial donations in his honor may be sent to Save The Sound 900 Chapel Street, Suite 2202 New Haven, CT 06510 or the charity of your choice. For further information, or to leave a condolence, please visit FarleySullivan.com