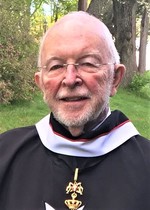 Andrew J. O’Keefe, 87, a prominent Hartford trial lawyer for over 60 years, of Cromwell and Point ‘O Woods Beach, Old Lyme, CT, peacefully transitioned to his eternal life on September 22nd, 2019, surrounded by the love of his family.

Gifted with a fierce intellect, he had a passion for life, a love of law and teaching, was a voracious reader, and a life-long student of Philosophy. He was a dedicated and loving husband who placed his faith and family above all. Possessing a photographic memory, he often would cite volume and page of reported cases in the midst of a heated trial, often to the chagrin of the presiding Judge. Possessing a dry Irish humor and sharp wit, he has left us with memories that we will forever cherish. He was a selfless man, who as a dedicated and faithful Catholic, worked tirelessly on behalf of the poor, sick, and unborn. He worked on behalf of the unborn child, was Nationally recognized the Right to Life movement where he became a much sought after speaker, traveling the country for speaking engagements in support of this important cause.

He was a standout on his high school track team, excelling in the high jump, pole vault, and 100 yard dash and was elected into the Wethersfield High Athletic Hall of Fame as part of the 1948 LL State Championship Soccer team.

He lived in Wethersfield from 1938-1979, Bethlehem from 1979-2006 and moved to Cromwell in 2006, where he resided at the TPC River Highlands until his passing. He graduated from Wethersfield High School in 1949, the College of the Holy Cross in 1953 with Honors and the University of Connecticut, School of Law in 1956 as valedictorian. While in Law School he was President of his Class and President of the Law Review.

After graduation he joined the faculty of the University of Connecticut Law School where he served as an Adjunct Professor for 58 years teaching Contracts, Criminal Law, Torts, and Advanced Torts.

He was the co-founder and Senior Partner in the Hartford Law firm of Jackson O’Keefe LLP until 2007 when he became of counsel. He appeared in every court in the State of Connecticut as a trial lawyer in hundreds of cases specializing in medical malpractice, product liability, construction cases, and negligence. He also argued in excess of one hundred appellate cases in the Connecticut Supreme and Appellate Courts, the 2d Circuit Court of Appeals as well at the United States Supreme Court. He was involved in the defense of the trials involving the collapse of the Civic Center and the collapse of L’Ambiance Plaza. He was designated a Super Lawyer in Connecticut and New England, as well as being designated as one of the best Irish-American lawyers in the nation. He was selected as a Lifetime member of the Best Lawyers in Connecticut, designated a Preeminent Lawyer and was rated with the highest ability and integrity by Martindale Hubbell.

While living in Wethersfield he served as the Town Prosecutor, Town Attorney, a member of the Zoning Board of Appeals, and a member of two Charter Revision Committees. He also served at Corpus Christi Parish in Wethersfield as President of the Church Council and as a lector. At a State level, he served on the Freedom of Information Commission for 15 years, of which he was the Chairman of the Committee for his last 9 years. After his move to Bethlehem he served as a Trustee of its Historic Commission, Chairman of the Building Committee at the Church of Nativity, as well as being a Lector and Eucharistic Minister.

He was recipient of the first St. Joseph’s medal from the Archdiocese of Hartford for his work with Church in 2002; founder and Chairman of the Board and President of the Connecticut Right to Life Committee, where he served as President for more than 10 years. He served on the National Right to Life Committee as a Director on its Board. He was a Commissioner for the State Freedom of Information Commission from 1995 – 2010 and its Chairman for 10 years. Most recently, he received an Honorary Doctorate of Humane Letters Honoris Causa in 2017 from the Holy Apostles College and Seminary.

He lived his entire life in accordance with the teachings of his Catholic Faith. Beyond his active participation and leadership roles in his individual Parishes in each town that he lived throughout his life, he was also actively involved with the Franciscan Sisters of the Eucharist and the Benedictine Sisters of the Abbey of Regina Laudis, as well as a Knight and lay member of the Order of Malta, dedicated to the helping the poor and disabled.

The legacy that he left, the principles he lived by, the example that he set by doing everything to the best of his ability, combined with his faith that guided him during his pilgrimage on earth has left an indelible impression in hearts of his family and friends that he has left behind. He lived his life with a sense of purpose, never losing sight of the ultimate goal in life – Heaven. As it was said in Matthew 25:21 ‘Well done, my good and faithful servant. Since you were faithful in small matters, I will give you great responsibilities. Come, share your master’s joy.’

Please join us for a celebration of a life well lived. Calling hours will be Wednesday, September 25, 2019 from 4-7 pm at Farley-Sullivan Funeral Home, 34 Beaver Road, Wethersfield, CT. A Mass of Christian Burial will be held at St. Johns Church, 5 Saint Johns Ct., Cromwell, CT 06416, on Thursday, September 26, 2019 at 10:30 am. Burial will immediately follow at Rose Hill Cemetery in Rocky Hill, CT.

Donations, in lieu of flowers, can be made to the Franciscan Life Center, 271 Finch Ave., Meridan, CT 06451. For on-line expressions of sympathy or to view his entire obituary, please visit: farleysullivan.com.