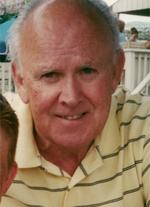 John H. "Jack" Cully, 84, of East Hartford, beloved husband of 61 years of Joan (Kelsey) Cully, passed away peacefully on April 15, 2019, surrounded by his family, after a long battle with Parkinson's Disease. Born in Hartford, June 19, 1934, son of William Brennan Cully and Catherine (Scully) Cully, he was a 1952 graduate of Bulkeley High School in Hartford. Continued with adult education at University of Hartford and Mitchell College. Surviving him are his wife Joan; his sons and daughters-in-law, Scott and Imy Cully, of Eugene, OR, Shawn and Donna Cully, of Bristol, CT; daughter Lynne Begin of East Hartford; Richard Begin of Andover; grandson Patrick Cully of Tacoma, WA; granddaughters Rose Cully of Eugene, OR, Brianna and Shannon Cully of Bristol, CT; brother and sister-in-law Don and Renee Cully of Richmond, VA and sister Mary Diesel of Freeport , NY. Jack was predeceased by his brother Bill Cully, his sisters Grace Sullivan, Genevieve Giuffre, and Lorraine Meade. He proudly served our Country, as a Sergeant in the United States Marine Corps, with the 1st Marine Division for 14 months in Korea. Upon his return from the war, he was stationed at the US Naval Sub Base in New London, CT. He excelled in his trade as a mechanical draftsman, ending his career at Scan Optics in Manchester. He was actively involved in Our Lady of Peace R.C. Church in East Hartford, serving on the original building committee and running weekly bingos. He was a devoted family man, taking great joy in seeing all his children’s school/sporting events, and giving voice to all of the grandchildren’s stuffed animals, especially "Lucky". Other passions, the Boston Red Sox, and New York Yankees, UCONN basketball, and casinos! He was an avid reader of history, the Presidents and American Indians, and loved to listen to Frank Sinatra and Big Band music.
Relatives and friends may join the family Monday, April 22, 2019 from 9:00 to 10:00 am at St. Augustine Church, 10 Campfield Avenue, Hartford, with a Mass of Christian Burial following at 10:00. Burial with military honors will take place in St Catherine's Cemetery, Rye Street, Broad Brook, CT. In lieu of flowers, donations may be made to the Michael J. Fox Foundation for Parkinson's, P.O. Box 5014, Hagerstown, MD 21741-5014 or St. Jude Children's Hospital, 501 St. Jude Place, Memphis, TN 38105. To extend condolences or for further information, please visit farleysullivan.com.